Both children and grown-ups had such good experiences on our camping trip to Assegaai in November last year that we all jumped at the opportunity to add the same weekend trip to our learning project about the Khoisan rock art. The hike to the sacred place with the rock paintings was still a challenge for most of us, but the rewards made it so worthwhile. Back at Rock Bottom, we had ad hoc but overall successful campfire story and play. The children shared dreams and nature impressions and observations in the morning’s dream circle under guidance of our rock art guide, Dominique Santos. Dom’s summarization of their stories sounded like a poem.

At Assegaai we walked 4 km to Lily pool. At Lilypool we swam and had fun and we had to swim across to see the rock art. The best thing of all the rock paintings I saw was the ladder because I was surprised by it. We had to walk 2 km to Rock Bottom camp.

I love the walk because so much beauty was around me. When we got to the pond I didn’t want to swim but I wanted to see the cave paintings on the other side of the pond. I tried to walk around but I stepped in shin-deep mud and lost my shoe. Luckily a parent came and helped me get my shoe. After that I decided to swim. I swam to the other side, to the paintings. My favourite painting was a praying mantis person. The walk back was quick. That night, there were lots of noises and I struggled to sleep. In the morning we had rainbow porridge and muffins. I had an awesome time.

There were highs and lows in the morning of our camping trip. The lows were: the 6 km hike, the heat and all the hold-ups. The highs were: Camp Rock Bottom, Lily pond and the play. We were all finished from the hike to Lily pond, but recharged after swimming and admiring the rock paintings at the other side of Lily pond. After another 2.5 km hike from Lily pond to Rock Bottom camp we claimed our beds and teacher Y said to us: “As we are out of Wi-Fi reach and we can’t have electronic entertainment, let’s make our own entertainment.” So, we had to put together a show for the adults. We made a play with almost the whole class, which we called: The Portal and the Tiger’s eye. The cast consisted of (in no particular order): Snow Leopard (Tau), Fashionable Spa-loving Hobo (Lila), Drunk Pregnant Donkey (Nitai), Unicorn (Alinah), Lion (Osi), Cotton Candy Monster (Ima), Queen (Lisa), Tiger (Kenzo), Eland (Nathan), Narrator (Thayfur). The play was bubbly, exciting and slightly absurd (and a tad too long). We all had so much fun doing it. My other favourite bit was swimming in Lily pond and at camp.

When I went to Assegaai with my class we walked on the red trail. When we were walking we heard birds, bugs, leaves and the spirit of the wind. Finally we got to Rock Bottom and we all went swimming in the river. Six o’clock we made our supper and after supper we had chocolate and marshmallows and bananas, then we went to bed. In the morning we all walked to Lilly Pond to the rock art. Even seeing it twice, I felt so close to them, all the spirits were around me. I think that the rock art has an important place in our history and culture; the time when magic was real.

We went on a 6 km walk, we stopped at Lilly Pond and we saw rock art. I saw people on horses and people with guns and I saw ladders. When we went to camp and I claimed my bed and then I swam at the deep side first. When I got there it was so shallow and when it was dinner I didn’t like our diner. When I woke up I swam straight away and then everyone else woke up and then it was lunch time I had a bun I wanted to go where everyone was but I slipped but I saved my bun I was amazed and then I went home this is the end.

Rock art is amazing but it’s hard to find it. You have to hike and you have to swim until you get there again. then you have to look on the wall and discover lots of paintings but you find them all so you look for some more. Now you’ve found them all. I love rock paintings.

This is the second time that we went to Rock Bottom for a camp. This time we went to Lily Pool first so we can learn about rock art because there is rock art at Lily Pool. But first you have to cross Lily Pool to go to the cave. That pool we love to swim there so we swam there most of the time. When we looked at the rock paintings, and it is amazing how they painted so that you just knew exactly what it was. For example, a praying mantis, a two-headed beast and this thing that looked like a ladder. After that we swam some more, this is exactly what I should write in my diary.

We got to Lily Pond and we swam there for a bit until the teachers came. We looked at the rock art on the rocks in the cave. I saw people dancing and hunting… We found very weird paintings too, of ladders and weird people and showed what they did. Then we carried on swimming. The teacher stayed and looked at the rock art. I went up for one last look and then we went to Rock Bottom.

The day started with loud music and us sitting in a white Nissan. Naliyah, Tau, Nitai, Kenzo and I. Kenzo wasn’t supposed to come with us that’s why we were a bit late. We started the 6 km walk at about 9:30 – 10:00 but yeah (it was only 6 km because it was 4 km to Lily Pond and 2 km to Rock Bottom). The walk made us all tired, which made us even happier to reach Lily Pond where the rock paintings are. The rock paintings were amazing. I love the mantis man, he had to be my favourite. We had to swim across Lily pond to see them and aunty Dom was there to give us more information. After about 2.5 hours we walked the 2 km to Rock Bottom camp. We quickly claimed our beds and then we went swimming again. It was shallow so I said the part at the end is deeper let’s go there so we walked about 20 m to the end we swam all day then we had a camp fire then one of our teachers, teacher Zanele, told us a lovely story in Xhosa then we went to bed when we awoke we swam again. For breakfast we had porridge then swam then we went back in uncle Marks bakkie it was amazing that was the camp.

When we were driving we saw a sable (buck) elephant ostrich rhinos birds and we stopped at the reception of Assegaai. We walked to camp and we swam in the dam and I went to bed and I took a rest and woke up at PM and I took my plates and my spoons and my bowls and for supper we ate a macaroni and cheese and for breakfast we ate oats with milk and smarties. We swam again and we have to go to the reception. And we saw a swimming pool and some trampoline and we got inside the house and we saw wedding pictures and we saw some paintings and some drawings and we saw some things and we saw some good things at the reception.
And at the camp we made a play for the teachers to watch tv they were so bored so we decided to make the play for them and we had marshmallows and we put the marshmallows inside the fire. And we played games in the boys’ room.
The rock art it was beautiful and I like the way that they drew it so beautiful and the thing that I like is the eland and the guy who was holding a bow and arrow and the ladder and the praying mantis.

At Assegaai we went to Lily Pond and we swam there. There was a snake and I did not see it. We went to the rock paintings there we saw a praying mantis man and a spider, eland, ladder and more. Then we went to Rock Bottom and swam and ate pasta and drank hot chocolate with marshmallows inside it and braaied some marshmallows. 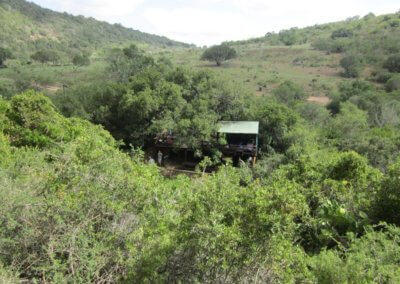 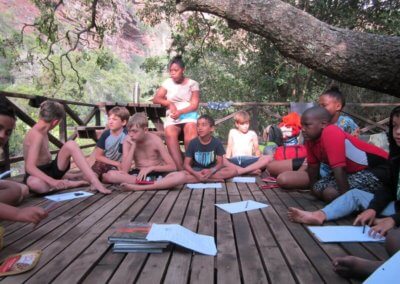 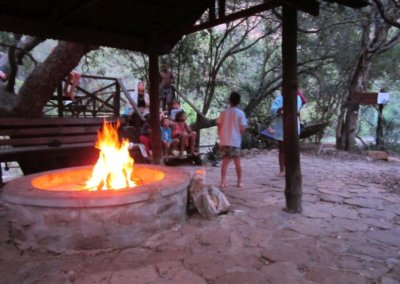 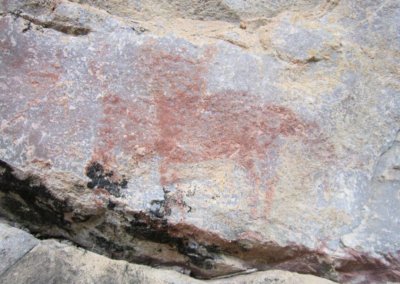 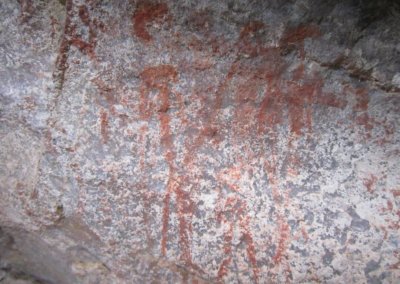 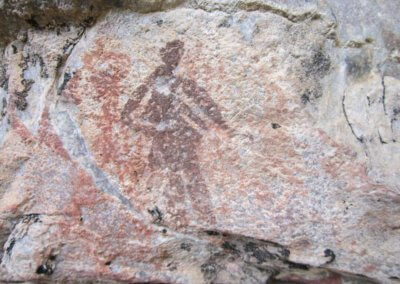 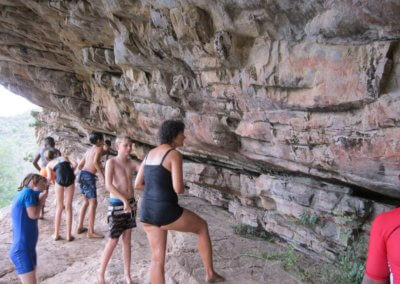 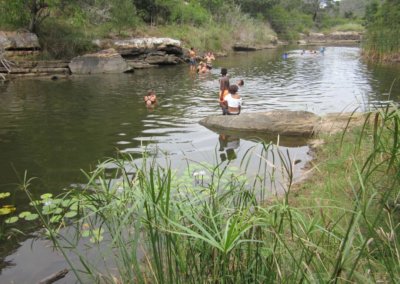 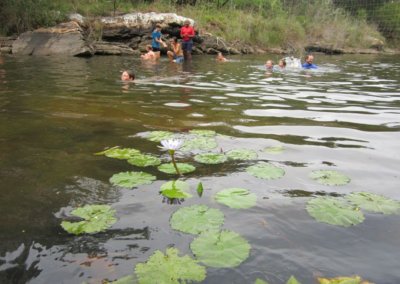